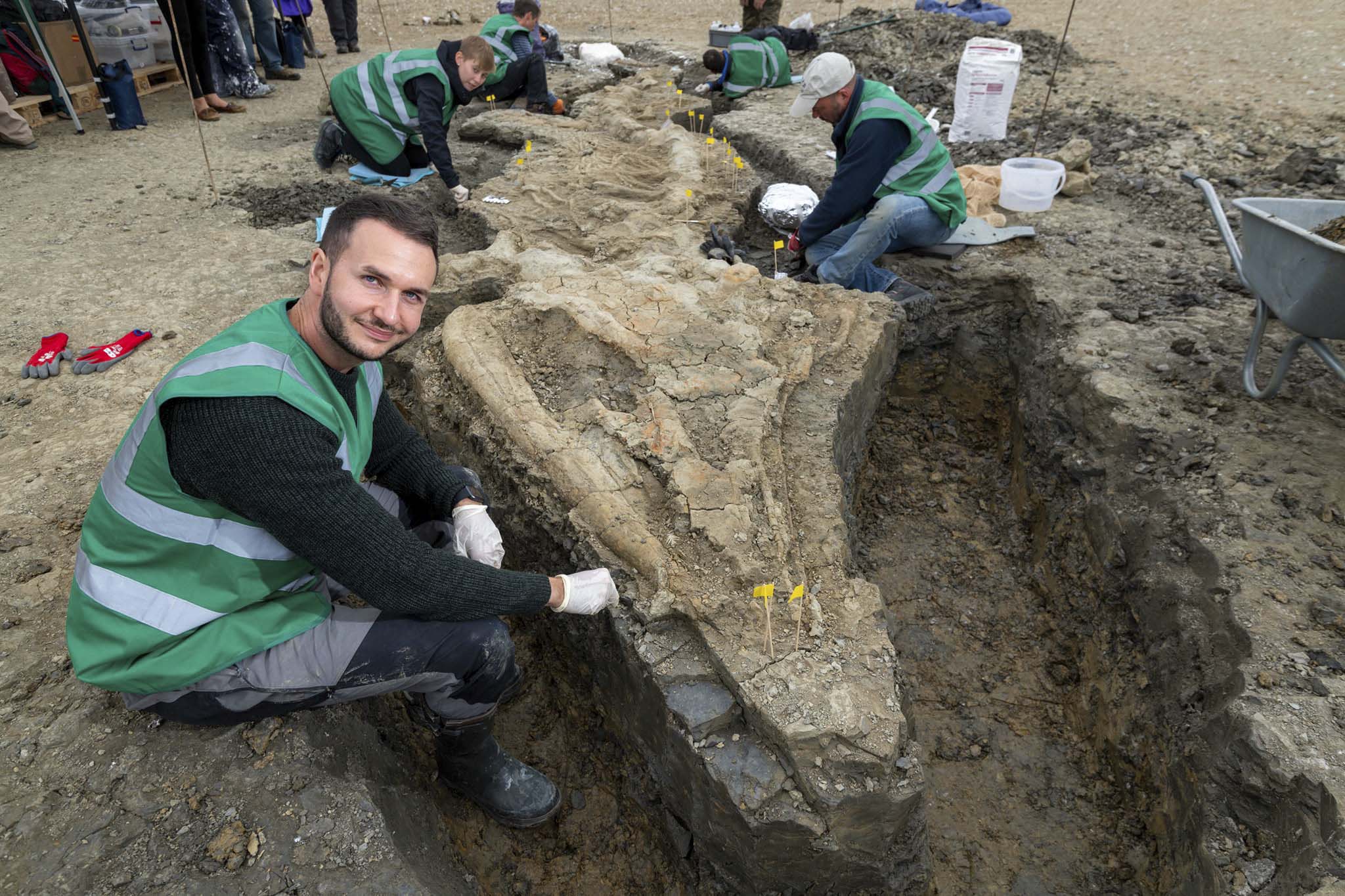 Digging up the past…

Rutland enjoyed 15 minutes of fame recently as news of an internationally-significant archaeological find hit the headlines. This month we speak with the expert responsible for carefully digging up the ichthyosaur which has been sleeping beneath Rutland Water for 180,000,000 years…

Make no bones about it, the discovery of a sleeping 180,000,000 year old ichthyosaur fossil in the county was quite a big deal. Over 2.5m people tuned into the BBC series Digging for Britain which covered the story, which has actually been one hundred and 80 million and one years in the making… as the dinosaur was actually discovered back in the winter of 2020.

The ichthyosaur was discovered by expert Joe Davis, Conservation Team Leader at Leicestershire & Rutland Wildlife Trust – which operates the nature reserve in partnership with the water company – during the routine draining of a lagoon island for re-landscaping in February 2021.

It is the most-well-preserved skeleton of its kind found to date in the UK and is also thought to be the first ichthyosaur of its species (Temnodontosaurus Trigonodon) found in the country.

The ichthyosaur is approximately 180 million years old and, with a skeleton measuring around 10 metres in length and a skull weighing approximately one tonne, it is the most complete large example ever found in Britain.

Rutland’s bedrock is entirely Jurassic in age and spans the period between about 195 and 160 million years ago, with the oldest rocks in the southwest and the youngest in the west. The ichthyosaur was found in clay-rich rocks dating from the Early Jurassic Period. More than 100 species of ichthyosaurs have been discovered and they have been unearthed all around the world.

Ichthyosaurs first appeared around 250 million years ago and went extinct 90 million years ago. They were an extraordinary group of marine reptiles that varied in size from around a metre to more than 25 metres in length, and resembled dolphins in general body shape.

The fragile remains of the huge skeleton were carefully excavated in August and September 2021 by a team of expert palaeontologists assembled from around the UK, in partnership with Anglian Water, Rutland County Council and the Leicestershire & Rutland Wildlife Trust. The excavation was led by world ichthyosaur expert Dr Dean Lomax and the specialist palaeontological conservator, Nigel Larkin.

“It was an honour to lead the excavation. Britain is the birthplace of ichthyosaurs – their fossils have been unearthed here for over 200 years, with the first scientific dating back to Mary Anning and her discoveries along the Jurassic Coast,” says Dean. “Despite the many ichthyosaur fossils found in Britain, it is remarkable to think that the Rutland ichthyosaur is the largest skeleton ever found in the UK.”

“It is a truly unprecedented discovery and one of the greatest finds in British palaeontological history.”

The discovery is not the first at Rutland Water, with two incomplete and much smaller ichthyosaurs found when teams initially constructed the reservoir in the 1970s. It is, however, the first complete skeleton ever found at Rutland Water.

Dean, the world’s foremost ichthyosaur expert, is an author and presenter who has had a lifelong passion for palaeontology.

“I was one of those children who absolutely loved dinosaurs; that annoying kid telling everybody dinosaur facts and correcting them on their pronunciations… I still do this. Born in Doncaster, from as far back as I can remember, I’ve had a passion and interest for all things palaeontology and the natural world.”

“In school, I was rubbish academically and struggled for most of my school years, having just about scraped by.”

“In fact, due to my poor GCSE grades, I was not allowed to do A-level science (which I would have needed for university) and ultimately failed the two A-levels that I did. Thus, I didn’t have the qualifications or the finances to go on to university.”

“I initially completed a short course on fossils at the Open University and after raising enough funds, during the summer of 2008, at the age of 18, I travelled to Wyoming, USA, to hunt for dinosaurs and further my professional experience. This was part of an almost four-month long trip working with palaeontologists at the Wyoming Dinosaur Center. That trip formed the backbone of my career. It helped me to realise my future goals and aspirations to succeed in palaeontology. In short, it changed my life.”

“On my return from Wyoming, still aged 18, I happened upon a chance discovery of an incredible ichthyosaur fossil at Doncaster Museum and Art Gallery – my local museum – which became the focus of my first-ever academic paper (despite having no experience whatsoever of writing a paper). This incredible discovery kick-started my career in academia and the transition from amateur to professional.”

The palaeontologist last year published his latest book, Locked in Time, which aims to tell the story of modern animal behaviour in light of 50 of the most significant fossils ever unearthed.

• The BBC’s Digging For Britain programme is still available to watch on the broadcaster’s iPlayer service.