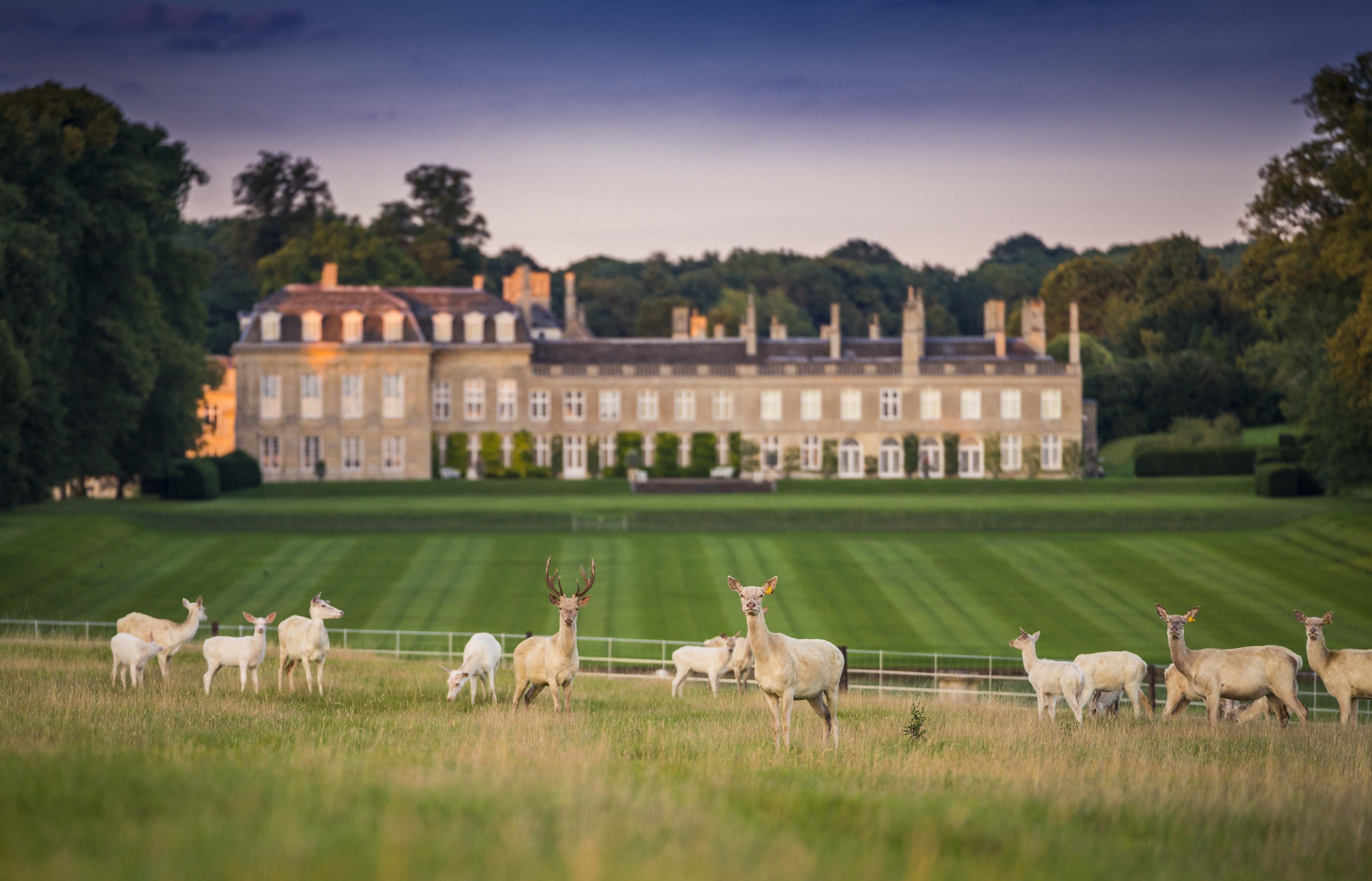 The Duke of Buccleuch’s Great Estate

Boughton House is the family seat of Richard, Duke of Buccleuch and Queensberry. Here, the country estate’s property manager Charles Lister takes us on a tour of a country home which, for 500 years, has existed in tranquillity throughout the ups and downs of history…

Well known as the county of ‘squires and spires,’ this area is peppered with famous estates including those of Burghley, Belvoir, Althorp, Deene, Castle Ashby and Rockingham Castle; while neighbouring counties vie for attention with gems such as Woburn and Blenheim.  However, much less well known, yet arguably pre-eminent among these, in terms of its pristine, unadulterated nature, is a house, which has lain quietly in its ancient parkland outside the town of Kettering, for at least these last 500 years.Boughton House remains very much a family home, for both the Montagus, who originally acquired the estate, and their descendants, the Buccleuch family. Its grand gardens and Designed Landscape were created in a burst of flamboyant enthusiasm in the late 17th and early 18th century and after a long period of slumber only reawakened in the 20th century.

Our story beings with the Chief Justice to the Kings Bench of Henry VIII, Sir Edward Montagu who purchased the manor in 1528, creating a house and gardens that would reflect his growing status.  His son and namesake succeeded him and regularly had exotic seeds and plants, including apricot trees, brought from London to stock the fine gardens at Boughton.

Whilst known locally for his part in the suppression of the ‘Newton Rebels,’ the 3rd Sir Edward and later first Lord Montagu was himself against the controversial policy of enclosure.  In 1639, Charles I granted him permission to clear the forest and extend the park at Boughton. Like his father, the second Lord Montagu was a Puritan but unlike him, favoured Parliament in the conflict between them and the king.

In these years of great turmoil little changed for Boughton or its gardens. However, his son would transform everything in the most spectacular way.

Ralph Montagu was a formidable courtier of his time, rapidly appointed as Ambassador Extraordinary to Louis XIV and with his entry into Paris being “so magnificent that it has scarce ever been since equalled.”

Whilst on the continent, he was inspired by the delights of Versailles and other French palaces but also by the royal gardens at Het Loo, in the Netherlands and later by those at Hampton Court.  They boasted labyrinthine wildernesses, multitudinous fountains, parterres and radiating walks designed by the Huguenot Daniel Marot, whom Ralph himself later employed.

He also found time in France to acquire a wife, pursuing across much of France the rich and beautiful widow, Elizabeth Wriothesley before she would accept him as her husband. She would prove a loyal and rather forgiving wife.

Also brought to England by Ralph was the Dutch gardener, Leonard van der Meulen, who became head gardener at Boughton in the Spring of 1685. A skilled land surveyor and water engineer, it was his task to create the desired extravagant acres of formal gardens, lakes and canals as well as the trees-lined avenues and walkways.

Ralph had embraced the accession of William and Mary and he had in turn been rewarded with promotion to the earldom of Montagu. In October 1695, William himself would travel to view the transformation of Boughton into a grand house with State Apartments that would reflect those that Ralph had witnessed at the court of Louis XIV.   The king was a passionate garden lover and Ralph would have been keen to impress the monarch with his developing scheme for his own landscape.

The River Ise which previously meandered through the park was transformed into a canal system flowing through various complex features all linked by terraces and tree-lined walks and ending in a great cascade. The exiled Marquis de St. Evremond, a frequent visitor to Boughton wrote in 1700:

“I hope the Cafcade, the Octagon, the Water-Sheafs and the Water-Spouts, shall have made my Lady Sandwich forget France.”

Whilst Michel le Vassor recorded that:  “Ralph first Duke of Montagu, polished Lord, magnificent, zealous defender of the freedom of his country, has so much embellished by the buildings, by the grand gardens, by an extensive canal, by the large ponds, by the extraordinary water jets, by a waterfall that outshines any in Italy and in France.”

On the 2nd March 1705 Ralph’s son and heir John was married to the daughter of the Duke and Duchess of Marlborough whose influence was instrumental in finally bringing Ralph the Dukedom he had so long sought.  Ralph would enjoy his last years in comfortable retirement at Boughton, surrounded by literary and artistic friends including Saint-Évremond who wrote: “I never desired anything so earnestly as to go to Boughton to see my Lord, the Good Company and learning in its full lustre.”

He was succeeded by John 2nd Duke of Montagu, still known locally as “John the Planter” after the great avenues of lime trees he created that radiated out from House.

He was very different to his father – an infamous practical joker but also appreciated for his devotion to animals, the Reverend William Stukeley writing of him: “He would have no cattle or horse killed but brought to end their days peacefully in a special paddock while he was surrounded by dogs, the ugliest of which he favoured because no one else would be kind to it.”

He travelled to Europe to follow his father in law, the great general Marlborough on campaign and would rise himself to become Master of the Ordnance and founded Woolwich Academy to train military engineers.  His interest in engineering extended to the continuing transformation of the landscape at Boughton, spreading out over 100 acres of intricate design with more than a mile of canals and over 30 miles of avenues,

“A river has been diverted for a distance of five miles, and after forming a lake of about ten acres in front of the house, it makes a bend and divides into several very long channels before falling into a cascade similar to the one at Chantilly, with five separate foaming falls, ending in a large basin of geometrical design.”

“Above the great cascade, there are another thirteen jets of water…Since this cascade consists of the actual river itself, it never ceases to flow, and is of very great beauty,” said Edward Southwell MPWith no surviving male heir, on John’s death inheritance came to the two surviving daughters, Isabella and Mary.  Whilst Isabella received a considerable

settlement, the bulk of the actual estates went to her younger sister, prompting a legal battle that lasted for several decades. Boughton was consequently little used during this period, with the sisters each having other homes more convenient for London. Mary expended considerably more effort at Warkton church, where she had the great sculptor Louis-Francois Roubiliac create outstanding tableaus to the memory of her parents.

As George and Mary’s son died before them, Boughton again passed through the female line to their daughter Elizabeth, who was already married to Henry, 3rd Duke of Buccleuch.

By all accounts, a love match, the two would combine vast estates, Henry himself being from a powerful Scottish family with great estates in the Borders. It is understandable then that Boughton became a backwater – loved and maintained by staff but infrequently visited by the Family.

In 1792 Boughton gardens were thrown open to the park and the deer and other stock were admitted and for the next 150 years, Boughton remained quiet save for occasional entertainments or brief stays by members of the family. The once lavish gardens faded into the background due to “benign neglect” and the impressive water features once more became little more than a meandering river.

The Victorian Age saw no great changes to the architecture or gardens, and so the many grassed over and half-forgotten features of the historic landscape remained intact and awaiting rediscovery.

It was the 8th Duke and Duchess who began the long and costly process of installing modern conveniences and making the house a home once more.

Their son and his wife, the 9th Duke and Duchess continued this process, balancing the necessary conservation requirements with the changing times and the needs of a family.   In 1975 the 9th Duke had the great Broadwater lake at the heart of the landscape once more dug out, restoring the view across it to the West Front and becoming a well-known feature to intrigue those travelling along the A43.

The current Duke and Duchess have built on this solid foundation, exploring the

gardens and archives as well as the outstanding fine art collection and architecture.  Music and dance have been re-kindled in the Great Hall and striking new sculptures appeared in the historical landscape.

Informed by the impressive collection of maps and designs from the original scheme, key features have been investigated and where possible carefully restored.

Two miles of historic avenues lost over the centuries have been replaced with limes cultivated from the original stock. The great lake has been boarded, the canalised river system recreated and most recently in 2014 the Grand Etang in front of the North Front was reinstated in its original glory – complete with a fabulous fountain.

Both the House and gardens remain a place of innovation as well as history, the needs of the family and the desire to please visitors melding in its evolution. In 2008 Kim Wilkie was commissioned to create a modern, but complementary feature, reflecting the great Mount of Duke John.

He chose to mirror this historic feature, spiralling down some 23 feet below the level of the nearby canal whilst acknowledging the beauty of the Fibonacci-sequence spiral upon a nearby stone rill.  In 2013 Angela Conner created a sculpture, Life Force at the Lily Pond which interpreted of the vibrant flow of energy through the landscape.

Yet it also remains a place for roses and wisteria to ascend the walls of the House, for the scent of the herb garden to calm the garden explorer and the park is surrounded by a vibrant, hardworking Estate with farming, forestry and property all helping to ensure the continuation of Boughton as a highlight of the area, and a wonderful place to visit this autumn.

Find Out More: More information on Boughton House can be found by calling 01536 515 731 or visiting www.boughtonhouse.co.uk.