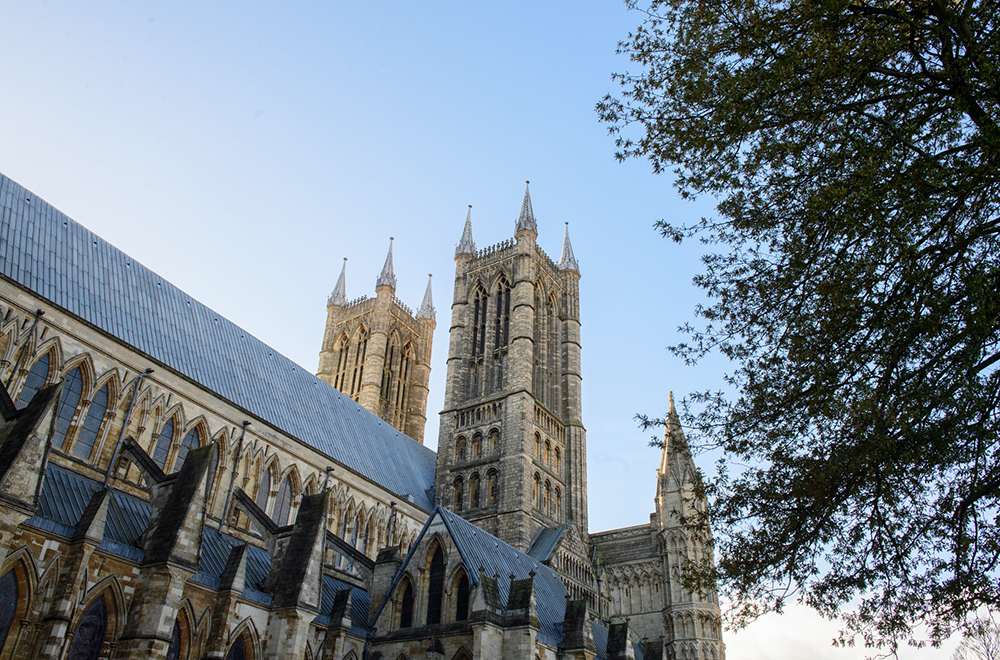 How well do you know Lincoln Cathedral? After all, it’s easy to take for granted the incredible feature of Lincoln’s skyline or to assume you already know all of its secrets and all about its history. Whilst I’d hardly call myself an expert on the building, though, a recent tour with one of its 93 floor guides, 22 roof guides and 15 tower guides shamed me into realising how little I knew of the building’s most dramatic or amusing secrets.

I beg and implore you to book a tour even if you’ve been a Lincoln resident for decades… you’ll still find new appeal and fresh information about the Cathedral from such knowledgeable guides as Stuart Welch, our personal Cathedral guru. Here, we’re letting you into just 10 of the very many secrets we discovered during our tour!

1. The Bishop doesn’t get the best seat in the house… Whilst the Bishop is the chief pastor of the Diocese of Lincoln, he merely sits in the Cathedral. It’s the Dean of the Cathedral, currently The Very Reverend Christine Wilson who is, as it were, in charge. The Dean, Sub-Dean, Chancellor and Precentor are the Residentiary Canons who each have their own seats in St Hugh’s Choir. The monarch (or their representative in the county, the Lord Lieutenant) also has a seat in the Cathedral.

At one time the Diocese reached from the Thames to the Humber. 53 canons each have their own prebendary and seat in the Choir. Each canon is assigned at least one psalm and each recites their psalm every day wherever they may be. This ensures that the entire psalter is recited in full each day. 2. Lincoln Cathedral is double glazed. Sort of… The Dean’s Eye window in the north transept of the Cathedral was subject to a 16 year £2m restoration which was completed in April 2006. It’s one of the finest examples of early 13th century English plate tracery in the world and contains mainly medieval glass. Originally the glass was exposed to the elements, but following its restoration, it’s protected by a clear secondary isothermal ‘modern’ glazed window in front of it. This is exposed to the outside world. So technically the Cathedral is double glazed! 3. Construction of the Cathedral is a bit iffy in places! Sacrilege, surely? The Cathedral is beautiful! Well yes, but there’s still some questionable construction in places. In particular, stand in the nave and look back at the West Front. When the current nave was created under St Hugh from 1190-1250, the masons worked back from the east in a westerly direction. When the nave’s ceiling reached the West Front, the ceiling didn’t line up. It’s about a metre out and visibly wonky!

Either someone miscalculated or the money ran out before they could replace the Norman West Front with a gothic version so they had to ‘botch’ the join! Also the lancets to the north and south sides of the West Front are visibly uneven. So are the lancets below the Bishop’s Eye window. South-facing walls of the nave aisle have five arched lancets between pillars. The north side has four and a half lancets dissected by pillars. 4. The Cathedral is also held up by braces and concrete! In the 1920s, the Cathedral’s south-west front tower was leaning. Rather a lot. In fact, the problem of a visible lean to the south was at one stage getting worse by about a sixteenth of an inch every day. Dean Fry began fundraising, estimating repairs at £50,000. By the time of his death, Fry had raised double that amount but still more would be needed. Delta bronze reinforcements were put into the West Front to arrest the Cathedral’s continuing structural problems.

Unfortunately as part of the works, the repairs also saw workers pumping concrete into the Cathedral’s cavities – a sort of cavity insulation – which we now know is less than ideal as limestone and concrete interact badly. Nearly 100 years on the concrete filler is crumbling, and the Cathedral once again faces the need to address structural preservation of the building. Fortunately we’ve a better understanding of building conservation these days, and any works completed to address the problems will be healthier for the building’s fabric in the long term, but again hugely costly!

5. Naughty children make great fenders for bells… During the 1920s when the Cathedral discovered the structural problems, the bells were prevented from completing their usual full circle ringing. Instead, they were ‘plucked’ to prevent too many vibrations shaking the Cathedral. There are bells in both the West Front (the change-ringing bells which ring on Sundays and for weddings) and in the Central Tower (which strikes every quarter of an hour to indicate the time). When Great Tom, the Cathedral’s 5.5 tonne bell, was recast in the 1830s part of the central tower ceiling had to be removed to accommodate the new bell.

Those installing the bell were so concerned about the bell banging into stonework as it was being raised that they came up with a novel solution. They tied (presumably very naughty) young children to the outside of the bell to provide padding next to the tower. Perhaps the children could have used their feet to brace the bell if it began to swing as it was being raised. Or perhaps they would just have squished the unfortunate children. Either way, it was an innovative solution as Great Tom was raised and has chimed since 1835 40,880 times a year.

6. The Cathedral’s limestone is coloured pink in places… After fire ravaged the Cathedral in the 1120s, the temperature reached over 300°c at which Lincolnshire Limestone turns pink. Masons investigating stonework in the aftermath scrawled an ‘X’ into the individual pink stones on the inside of the West Front. If the pink colour went too deep they were individually replaced, but if the colour was only to a superficial depth, the pink stones were retained. So, some of the internal stonework is bright pink!

7. Lincoln Cathedral is home to the world’s first ‘flat pack furniture…’ Bishop Alexander (1123-1248) modestly styled himself Alexander ‘The Magnificent,’ and upon his appointment, treated himself to a swish new font of Tournai marble. It arrived in ‘flat pack’ form, and was assembled on site. It’s the oldest piece of furniture in the Cathedral and came as a ‘buy one, get one free,’ with a free grave slab which the Victorians incorrectly attributed as the resting place of a previous bishop Remigius. There’s a fissure in the middle of the slab thought to have been caused by the earthquake of 1185.

8. There’s more than just one Lincoln Imp… There are in fact a number of imp grotesques around the Cathedral, not just the single one in the Angel Choir. 9. There are some rather cheeky carvings and murals… The choir screen which separates the nave from St Hugh’s Choir was carved in the 1330s and features roses and other carvings. However, there’s also a rather rude grotesque of a carver showing his bottom in a rude gesture. Meanwhile, the Russell Chantry features murals painted by Duncan Grant in 1953 and designed to reflect the county’s wool-trading heritage. Unveiled in 1953 they caused rather a shock and the Chantry was closed to the public until 1990. The reason? The artist – a member of the Bloomsbury Set – introduced a little too much of his personal life into the mural…The Chantry was finally reopened to the public in the more socially enlightened nineties. The choir screen was once highly colourful, with red, gold and blue highlights. In the Cromwellian era, such gaudiness was an anathema, so the whole screen was whitewashed. As they were considered idolatrous, the carved bishops were beheaded then replaced at a later date. The problem was the figures were not in fact all-male bishops, but saints of both genders. The heads were replaced randomly, hence the screen today features some bearded heads on female bodies. 10. The Cathedral features a number of ‘selfies…’ In the same way that an artist signs a painting, masons have ‘signed’ the Cathedral’s stonework since medieval times. Likewise, on the choir screen there’s an early ‘selfie’ of a stonemason with a mallet and his leather cap on. Meanwhile, after restoration of the South West Pinnacle in 2012, one modern mason replaced like-for-like one ‘selfie’ grotesque with a modern equivalent – holding a mallet and a pint of ale!