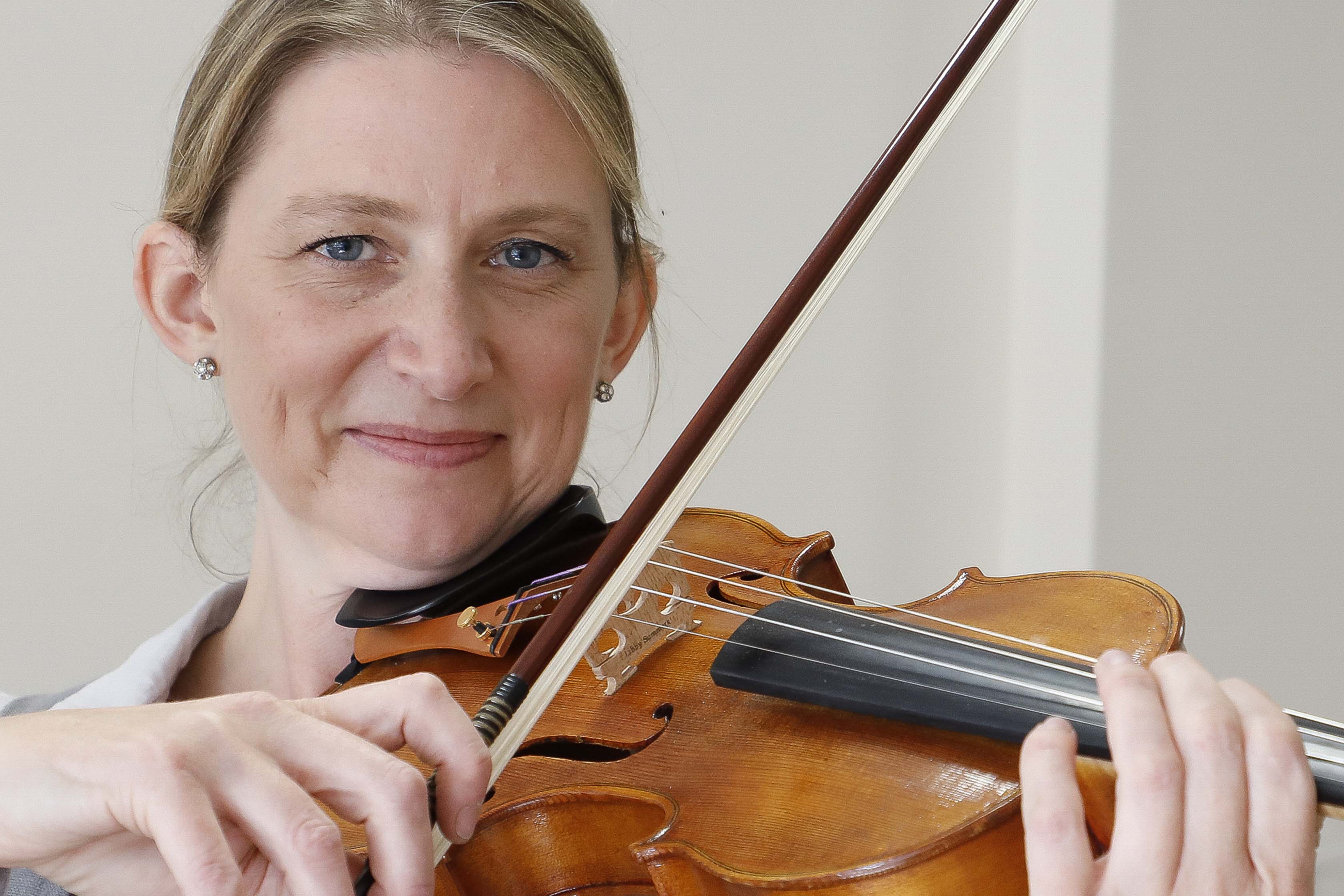 This month we celebrate the opening of a brand new business in Stamford as Libby Summers opens the door to her violin making, repair and renovation shop. It’s another string to the town’s bow…

The Sun Was Shining, the morning mist had burnt off the fields as I drove through the countryside and the pupils of Stamford Endowed Schools were filing neatly into their classrooms. The start of another Monday, but it was a morning unlike those which preceded it for Libby Summers, as the teacher turned luthier – or violin maker – turned around the sign of her new shop, Stamford Strings, to read ‘Open.’

It would be particularly apt to state that the new shop is another string to Libby’s bow, given the metaphor’s relevance to her role as a creator, repairer and seller of violins, violas and cellos, now with her own dedicated premises on St. Leonard’s Street.

“I had a wonderful teacher called Jane Page at Stamford High School who made learning the instrument really enjoyable,” recalls Libby. “My grandfather was a musician and tried to pass on the joy to my father, but he was more of a mathematician… and he didn’t really get to grips with it!”

“That’s fine because I inherited my grandfather’s instrument instead and in hindsight that was really important. You’ve more passion for an instrument if you’ve a really nice example of one to play, right from the start. I always had a tremendous love and respect for my first violin.”

“Stamford Endowed School had a brilliant scheme when I first started to play at 11 years of age whereupon each child could learn a stringed instrument. The same scheme still exists in the school today, which is really commendable.”

Libby was raised in the town but left to study towards a MA (Hons) in Social Anthropology at Fife’s University of St Andrews in the early 1990s. Whilst studying Libby also lead the university’s chamber orchestra and upon graduation, moved to Cambridge to take up a research position in the city, eventually meeting her husband and then moving to Surrey.

“I fell into teaching the violin,” Libby admits. “We lived in the quintessential Surrey village where many of the other ladies in the area had founded cottage industries. We were surrounded by textile artists, artisan bakeries, craft business and other rural enterprises.”

“I set up a business producing hand-knitted bags and alpaca wool hot water bottles which were commissioned by John Lewis and sold by the retailer at Christmas time. I even commissioned my own alpaca wool from Peru and sold it online, alongside DIY knitting kits and craft projects.”

“But this was around 2012-2015 and online retailing was maturing at a fierce rate and those businesses that were best placed to compete were huge retailers who could sell cheaper and throw hundreds of thousands of pounds at things like SEO.”

“I had already undertaken a teaching qualification and at the same time I was picking up lots more violin tuition. I visited Newark’s School of Violin Making – a leading place for the craft, one of the best five places in the world to learn the skills needed – and with just one sniff of the wonderfully scented workshops, bristling with the chafing of a plane and murmer of craftsmanship, I knew I’d found a way to combine my two passions; crafts and music.”

Covid has made the completion of Libby’s course a little more difficult. Ordinarily around 18-20 students work alongside one another on the timed creation of their magnum opus; a violin made over five weeks to be judged by Peter Beare. For the uninitiated, that’s the super-posh home of stringed instruments on London’s Queen Anne Street established in 1865 and now home to Beare’s International Violin Society.

Along with her peers, Libby has spent 2020 crafting half a cello and over a five week period her final year instrument too, ready to be judged in December – something which usually takes place in July.

Her instrument is judged in the white; in other words, unvarnished, as that final coat can cover a multitude of sins which betray a less than deft touch with the hand tools and 200 plus hours it takes to make a violin, a whistlestop tour of which we’ve provided over the page.

It’s possible to pick up a cheap violin online for less than a hundred pounds. They’ll sound every bit as cheap as their price tag suggests, but at least when the present Mrs Davis tires of my clumsy efforts to learn the instrument and eventually re-purposes it as a blunt instrument – as opposed to a musical one – it may be considered as a more disposable object.

For the more invested, modern factory-made violins such as those from Hidersine, Eastman and Primavera cost anywhere from £100 to £1,000, with a market, too, for older violins whose prices are dependent on provenance and quality, roughly £500-£3,000. Libby’s shop has around 20 handmade violins from those who can best be described as artisan makers. Libby is one, and her second year instrument has a price tag of £2,000.

Her tutor in Newark was Peter Smith, who has decades of experience as a luthier and whose instruments command £10,000. Libby shows me one and it’s certainly beautiful, but it takes someone with a more acute ear that mine to discern the difference in sound. Higher grade handmade violins from all eras start at around £3,000 and go up to millions of pounds  for the most desirable Stradivarus or Guarneri.

To our mind – and our ears – the sweet spot in the violin market is that of the handmade instrument by Libby or her contemporaries. With five or six weeks and upwards of 200 hours invested in the creation of each instrument, Libby couldn’t make instruments rapidly enough to solely stock her own violins, and so provides a boutique for other luthiers’ work. Libby knows, by rote, the dimensions of a violin, the slightly larger viola and significantly larger cellos.

“Many violins are based quite heavily upon the design of Antonio Stradivari – they sell for as much as $16m today – but the instrument I play is based on Giuseppe Guarneri. To the untrained eye – and ear – violins based on each 17th and 18th century maker are similar but there are differences.”

“Choosing a violin you enjoy playing is quite personal, subjective. Different instruments produce sounds more suitable for orchestral, chamber or solo performances and the different woods, variations in shape and string setups are additional considerations.”

“A violin can also vary in weight. Ideally the instrument should be as light as possible without feeling fragile and should have the right thickness and consistency for sound projection – varying from 2.3-5mm.”

Remarkably some people on Libby’s course in Newark didn’t even play a stringed instrument. Libby’s understanding of violins and violas meanwhile is unsurpassed and can be described quite legitimately as inside out  since making her own instruments also gives her an insight into how tweaking and adjusting even quite inexpensive instruments can help them perform better, as well as helping her in restoring and repairing instruments.

“I’ve only just gained a dedicated premises for my work but when I was working from home I was completing two or three repairs a week, and I usually have one or two restorations on the go at any one time. I’ve a bowmaker who will be joining me to rehair bows which is a common necessity, and to replace them if the bow has suffered damage or the owner wants to upgrade.”

I’d barely set foot in the door of Stamford Strings before the first walk-in customer greeted her and confessed that his violin had seen better days. The gentlemen confessed that he’d been meaning to have it repaired for some time, but simply didn’t know where to take it. He’d certainly come to the right place… unlike me, who it’s safe to say won’t be performing in public any time soon.

For the first time ever, I balanced a violin on my shoulder, wrapped my fingers around the string board, and drew a roisined horsehair bow gently across the instrument. Dear god… the noise which resulted was like two drunken cats engaged in a heated debate about Brexit.

Happily, Libby was happy to take over and delivered an impromptu performance of Elgar. Her repertoire, by all accounts is eclectic, taking in classical, jazz and pop. The genre, she points out, is irrelevant, against the competence of the performer and the joy one can find in the tune.

Another visitor to pop by during our visit was Stamford’s Mayor Bill Turner with Deputy Mayor Gloria Johnson who cut a ribbon to officially declare Libby’s new business open.

With a snip and a round of applause, the town gained its newest enterprise, owned and run by a true specialist in her field keen to provide a traditional service, and a unique one at that… one might say that the shop is yet another string to Stamford’s bow. 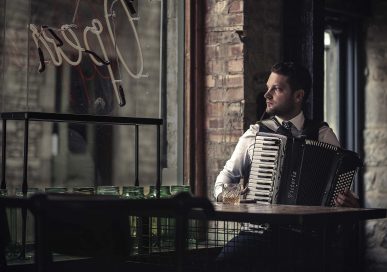 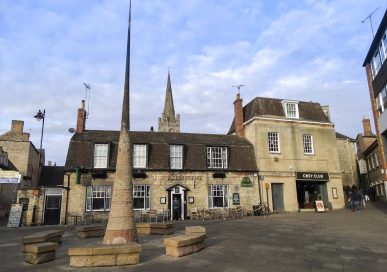 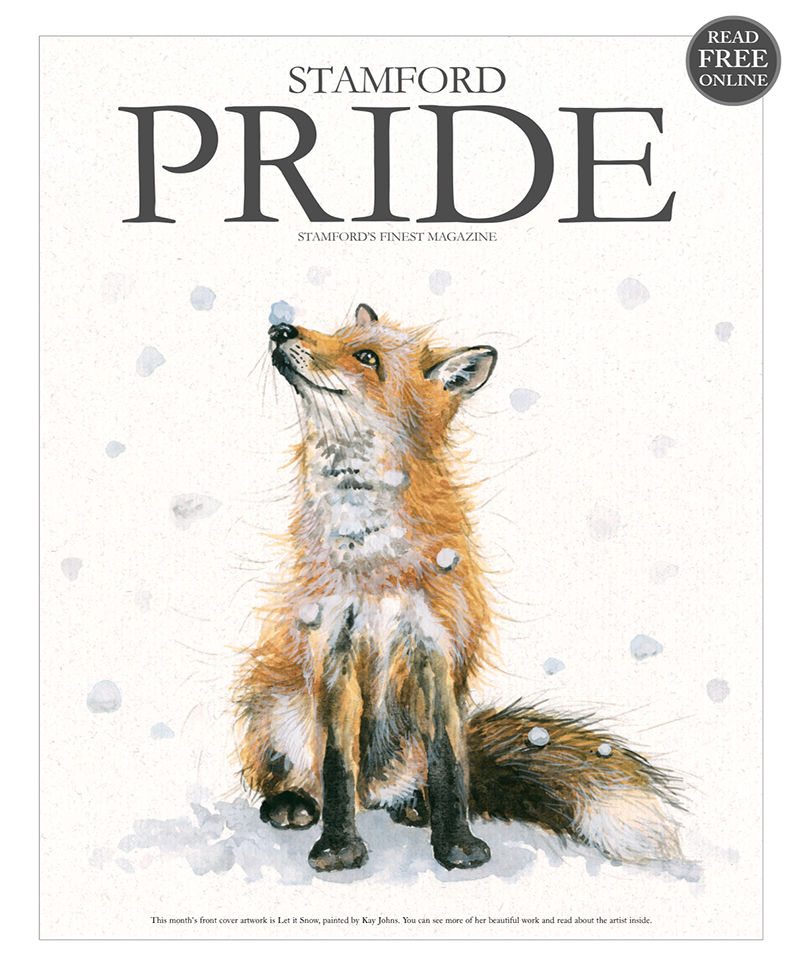